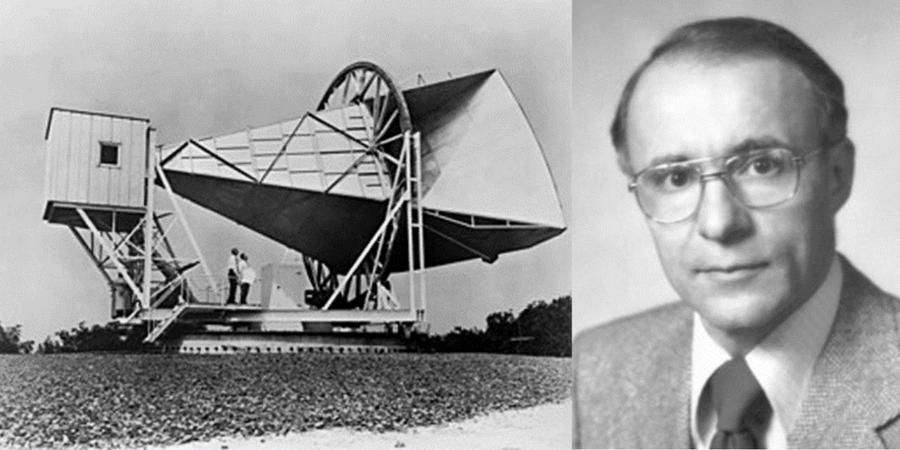 A Surprising Connection Found Out of this World

Photo: (right) Penzias and Wilson stand below the Holmdel Horn Antenna, the site of their most notable discovery. (Left) A picture of David's relative, Arno A. Penzias.

Here’s the story of a surprising connection I found during my summer internship at DOROT. First, there is one thing I believe you should know about me: I love finding unexpected connections—whether that be people, places, or shared experiences—that seem too good to be true.

During my first year at Tufts, I took a class called “Big Bang to Humankind” headed by astronomer, Dr. Alan West. This class, guided by Bill Bryson’s book “A Short History of Nearly Everything,” covered the astronomical, biochemical, and anthropological history of our universe from the Big Bang to the current era of modern homo sapiens. In this class, I learned about Cosmic Microwave Background Radiation or CMBR for short. CMBR is radiation from about 400,000 years after the Big Bang that is currently filling our universe. Analyzing CMBR gave scientists information about the contents of the early universe and data that supported the Big Bang Theory. It was a breakthrough and accidental discovery by Arno A. Penzias and Robert Woodrow Wilson, which earned them shares of the 1978 Nobel Prize in Physics.

This summer, a handful of DOROT interns and I are completing Legacy Projects under the advisement of the Lasting Impressions Department. For this project, the interns chat weekly with an older adult to build a connection and help them record their legacies for their loved ones. These projects can be written, oral, or visual and can be on any topic ranging from favorite cooking recipes to family history.

My older adult match, David, and I talked about his family history and his family members’ Holocaust survival stories. He told me emotionally impactful stories about how his various family members escaped Nazi territory via the Kindertransport to settle in England. Specifically, I learned of David’s father’s cousin’s son who eventually made his way to America, where he went on to earn a Ph.D. in astrophysics from Columbia University and later won the Nobel Prize in Physics. After one Google search of David’s relative, I confirmed that his relative, who won the Nobel Prize in Physics, was, in fact, physicist Arno A. Penzias who was awarded for his joint discovery of Cosmic Microwave Background Radiation. What a truly unexpected connection!

(This story was written with the permission of my Legacy Project older adult match, David.)

An-lin Sloan is a Summer College Intern in the Connect Through Tech Department at DOROT. She is a rising sophomore at Tufts University pursuing a major in international relations and a minor in Spanish.